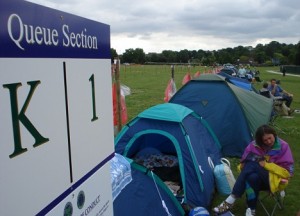 If like us at LOVEtennis Blog you are diehard tennis fans then no doubt you will have thought about paying a visit to the hallowed turf of SW19. For REAL FANS  ( not corporate folk that take the seats from us) there are two ways you can go about getting tickets. You can apply for the Wimbledon public ballot, this takes place every year and gives the opportunity for ordinary folk to purchase extraordinary tickets without having to queue. Simple, sign me up for that I hear you say. Heres the catch, the demand for these public ballot tickets simply outstrips supply. In a nutshell you write to the All England Club and they will send you an application form which you must fill in and return before the 31st of Dec. If you are one of the lucky few that get tickets, feel priveleged as there are 10 who werent so lucky. If you are one of the other ten, you must queue, queue in a long queue.

My first experience of the Wimbledon queue was way back in 2005, as a scruffy student just finished exams I along with a few friends, lets call them Senor Murf and Senor Scorah made the trip to London to see some tennis! We arrived at Gatwick at 8am on a beautiful morning, got the train into Victoria Station ( centre of London) and dropped our bags at the 5* Dorchester Hotel. We then hopped on the district line down to Southfields station. It was only on stepping onto the platform that you began to feel a big tennisy, there were huge billboards of Andy Roddick, and when we emerged to the surface, throngs of tennis fans, paper sellers and taxi drivers all heading en masse down the road! 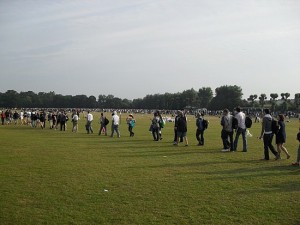 I walk quick at the best of times, but this time I was like a cheetah, dashing up the street passing the taxis in the process as I horsed it up the road. Eventually I got to a wee women, whom I would describe kinna like a tennis traffic warden who simply pointed to her right, you’re for the queue are you? I nodded, exasperatedly at what was before me.  A huge green field and all I could see were people, rows and rows of people standing there in there. Senors Murf and Scorah caught up and we sculked across the field to the end of queue. A nice lady handed me a queue ticket with a red number stamped at the bottom 5792. Holy cow, I was the 5792 person in queue.  As the baking hot sun rained down on us, we did start to move slowly but surely.Once you see the side of court one, the purple and white flowers that decorate the esplanade of the court, it starts to feel a little real. Up until then you could be standing in any street in the world in any queue!

So having arrived in London at 8am, we finally made it past the security barriers and into Wimbledon after 5. All I can say is waowee, we didnt know where to run or what to do. But Wimbledon was better than anything I could have dreamt off, the television just gives a flavour of the place, but to see how close you get to the players, its simply amazing! Like crazed children we chased each other from court to court, peering over the gangways to see what we could see, if we could find any players we actually knew! Having ran around from an hour, and become quite hot and sweaty in the process we decided to go buy a drink. So picking a stall with a small ( er) queue we went for a drink of water… £2.50 a bottle or something crazy like that……