I literally can’t do it.

It’s early afternoon; I’m in the transportation car on my way to the courts.

And I am having an anxiety attack.

Actually, I’m having several anxiety attacks — at first, one every 15 minutes or so, but pretty soon every 10. My mind starts spiraling. I’m just freaking out.

And I tell her the truth: “The only thing that makes me feel better right now … is the idea of not playing this match.”

She hesitates, and looks at me for a second, to make sure I’m serious. I am serious. This isn’t me thinking — this me reacting, feeling, trying to survive. She answers plainly. “Well, then, you shouldn’t play. You don’t have to play. Just … don’t play.”

My anxiety disorder started in 2012, during what should have been the high point of my career. I was at the end of a long road — a few years long — on which things really started to come together for me.

In 2009, I had had this sort of eye-opening experience, this turning point. I was 27. Up to then, I’d had a nice career. It was a career that, in many ways, I could be proud of: I’d won the silver medal at the 2004 Olympics, had some results at a couple of Grand Slams, seen the world, made a good living. But it was nothing sustained.

I think it’s important that my story not have a sports vocabulary. I didn’t “choke” in Act Two, and I’m not going to “win” in Act Three.

I was newly married, and my perspective was changing, growing. And I think I just sort of realized, in a way I previously hadn’t … that “nice,” as a tennis career, wasn’t good enough for me. That I wasn’t finished. That I still wanted to do some really cool things in the sport. And that, most importantly, it was now or never.

I changed my diet, my lifestyle and, honestly, my whole outlook. I went from 202 lbs. to 172 lbs. — I found my “fighting weight.” I wasn’t really 100-percent sure where any of this was going to take me, but I knew that I had to find out.

In 2010, I started to get results. I beat Andy Murray in Miami in straight sets — a result that I never would have gotten a couple years prior. I played back-to-back five-setters at the French Open — losing the second match 10-8 in the fifth to the No. 14 seed Ivan Ljubicic, but playing at a fitness level that I never would have been able to reach before. I won two tournaments in a row that summer, in Newport and Atlanta — beating John Isner in the Atlanta final amid a heat wave on a court that was about 150 degrees. I lost the final in Cincinnati to Federer 6-4 in the third, a match I easily could have won. And I beat Andy Roddick — who had beaten me like a drum, eight straight — a couple of times.

2011 was even better. I had my best results at Roland Garros and Wimbledon. I passed Andy, one of my best friends, to become the No. 1-ranked American. And then — and maybe coolest of all — I officially became a top 10 player in the world. By the time 2012 rolled around, I was No. 8. It was everything I’d worked for, and built for myself almost from scratch, over those last few years. I wasn’t Just Another Guy on tour. I was on an elite level.

And that’s when the anxiety attacks started. Anxiety is hard to pinpoint from a cause-and-effect perspective, but when I think about its genesis for me a couple of things come to mind.

The first is that my expectations changed, both externally and internally, along with my ranking. Looking back, this wasn’t necessarily the healthiest thing. My dissatisfaction with the status quo — that had been so helpful when there were 20 players ranked in front of me — crossed over into something more stressful, and then destructive, I think, when that number became reduced to seven.

The idea that I wasn’t good enough was a powerful one — it drove me, at an age when many players’ careers are winding down, to these amazing heights. But it also became a difficult switch to turn off. I was, objectively, doing great. And looking back, I wish I had been able to tell myself that. But doing great wasn’t something that my frame of mind back then had time to process. All I could focus on was doing better. It was a double-edged sword.

And the second thing is that I began experiencing these heart arrhythmias. An arrhythmia is basically the electricity around your heart, malfunctioning. My heart would go a little crazy, and I wouldn’t be able to stop it. It was really scary. I took some time off, then had a corrective procedure called an ablation, after which I was ostensibly “fine.”

But when I returned to the court that summer, around Wimbledon … that’s when I began to get these really weird, new thoughts. Uncomfortable, anxious thoughts. Like I was nervous about something that was going to happen — even though it kept not happening. And I think that what I went through with my heart was, in many ways, this trauma lurking in the shadows of those thoughts.

I was having trouble sleeping; I couldn’t sleep alone. I had to have my wife there, with me, always. I had to have someone in the room, always. I was a guy who loved being on my own. I loved traveling on my own, that solitude. That feeling of shutting off your phone and heading on a long flight … that used to bring me peace. But I couldn’t travel on my own anymore. My parents had to come out to Wimbledon. I needed people around me at all times, period. 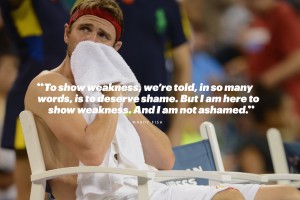 And through it all, I just kept having these … thoughts. This anxiety. I became consumed by this exhausting, confusing dread.

And the attacks just kept … getting … worse.

Ironically, at this point I wasn’t experiencing any problems on-court. I was still having results: fourth round at Wimbledon, quarters in Canada and Cincinnati. I was still playing well.

It was only away from the court that this problem existed, and compounded. That these thoughts kept creeping in. And they were becoming more and more frequent: from once or twice a day, to a handful of times a day, to eventually — when it got really bad, by the end of the summer — every 10-to-15 minutes. Anxious, overwhelming attacks of thought. When I’m back at the hotel, I’m googling “anxiety disorder,” “panic disorder,” “depression,” “mental health” … but really I knew nothing about any of it. I didn’t know what to do. I just had no idea.

At least, I told myself, it wasn’t happening on the court.

And then it happened on the court.

It was at the 2012 U.S. Open, at the end of that summer. I had to play a night match in the third round against Gilles Simon — a higher seed than me, but I was playing better than my seed. I felt good about my chances.

It’s a great position to be in. Night matches at the Open are reserved for the best pairings, but also for favorite players — the players people want to watch. And I was one of them. After years and years of being on the outside of that looking in, now I was part of it. I wasn’t playing in someone else’s match. It was nighttime at the U.S. Open, and I was playing in “The Mardy Fish Match.”

That was special, but it was also stressful. The match was up and down, really emotional. I was on edge the whole time: fist-pumping, throwing my racquet, and feeling … anxious. I was anxiety-ridden.

And I’ll never forget when it happened — the first, and only, anxiety attack I would have on a tennis court.

That was my trigger.

And it just kept spiraling and spiraling to the point where I couldn’t control it. I had no idea what was going on, tennis-wise. No idea. I don’t remember a thing. Somehow I ended up winning the next three games, and the set, and the match. But I don’t remember it at all.

It was nighttime at the U.S. Open, and I was playing in “The Mardy Fish Match.”

Once it happened to me on the court, I knew. Nothing would be the same again.

Then two days later, it all came to a head.

I’m not going to play.

Three years later, I’m back at the U.S. Open for the first time. And though I think that I can still play at a pretty high level, this will be my last tournament. After the Open, I’ll retire from tennis.

This isn’t a sports movie, of course, and there won’t be a sports movie ending. I won’t be riding off into the sunset, lifting a trophy. I’m not going to win the tournament.

But that’s fine by me — because honestly, this isn’t a sports story. And I think it’s important that my story not have a sports vocabulary. I didn’t “choke” in Act Two, and I’m not going to “win” in Act Three.

This is a life story.

This is a story about how a mental health problem took my job away from me. And about how, three years later, I am doing that job again — and doing it well. I am playing in the U.S. Open again.

This is a story about how, with the right education, and conversation, and treatment, and mindset, the things that mental illness takes away from us — we can take them back.

Tens of millions of Americans every year deal with issues related to mental health. And the journey of dealing with them, and learning to live with them, is a long one. It can be a forever one. Or, worse, it can be a life-threatening one.

And I want to help with it.

I want to be a success story, in my own way. And I think that retiring on my own terms, in the tournament I love the most, is part of my being able to do that.

Talking about it — and keeping the conversation going, and going, and going — is also part of that. Mental health is not a very easy thing to talk about in sports. It’s not perceived as very masculine. We’re so trained to be “mentally tough,” in sports. To show weakness, we’re told, in so many words, is to deserve shame.

But I am here to show weakness. And I am not ashamed.

And that strength, ultimately, comes in all sorts of forms.

That, too, is strength.

As for what comes next, I’m not sure. I’m 33 now, and I know that I’ll never do anything as well as I played tennis. But that’s fine.

I still deal with my anxiety on a daily basis. I still take medication daily. It’s still in my mind daily. There are days that go by where I’ll think to myself, at night, when I’m going to bed: Hey, I didn’t think about it once today. And that means I had a really good day.

Those are the victories, for me.

But there is no tournament to win for mental health. There are no quarterfinals, or semifinals, or finals. I will not be ending this piece with a sports metaphor.

Because sports end in a result. And life keeps going.

Mine, I hope, is just getting started.