Two of the most well known faces in the world will come together next week at the Vatican. Roger Federer the Greatest Tennis Player of All Time will meet Pope Francis in Rome next week as part of the very first global conference on faith and athletics on 5-7 October. Roger has been invited by Papa Franco with some 150 other people including athletes and sports executives. Pat LaFontaine, Pele and Yao Ming are expected to attend asw

The main objective of the conference is to discuss how both faith and sport can promote positive values and can create a better humanity around the World. This event aims also to let people understand how important and relevant are faith and sport nowadays. The event is not restricted to just sports stars and executives and U.N. Secretary-General Ban Ki-moon and Thomas Bach, president of the International Olympic Committee will also be in attendance.

The event itself promises to be a great opportunity to have so  many high profile individuals together in Rome. Roger isn’t the first tennis player to have such a high profile meeting with the leader of the Roman Catholic Church in the world.  Fellow Argentinian Juan Martin Del Potro met Pope Francis a few years ago during the Italian Open. Delpo as he is affectionately known brought his tennis racket to be blessed by his fellow countryman. Pope Francis even gave the big man a thumbs up during mass!

Genie Bouchard herself posted a selfie with the Pope in the background when in Rome a few seasons back. The Canadian player looked pretty star struck when the Pope Mobile drove past and called it possibly the best selfie ever!  Perhaps Roger will manage to get a private Selfie with his holiness who knows! 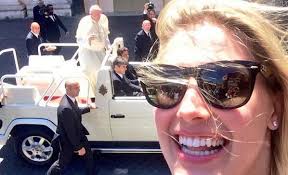