Queue Star Wars music…Nah Nah Nah NanaNah NanaNah… It’s April, which means it’s the return for the dirt ballers. The clay court season is finally upon us, in truth however, it was never really gone for this anti-social breed of tennis players. For while everyone else is playing the American hard court and the miniscule grass court seasons, this crew of pure blud n guts miscreants return to the red sands of latin America, Africa and middle Europe to ply their trade.

This menacing surface has proved an enigma for many a tennis star; Pete Sampras and Andy Murray for example, and this part of the season usually upsets the established order in tennis.  This year could be different…

With Federer finally breaking his French Open duck and career slam monkey off his back; Nadal unbelievably losing to Soderling in the French last year; and the fact that we’re already having a topsy turvy season means that this season is going to be the most unpredicatble yet… A pain in the arse for those playing ATP’s Bracket Challenge!

So what is store for us over the coming months, dare we guess it here at LTB.  Federer is always a good place to start.  Having beaten Nadal again on clay last year, and winning the French Open, he will be playing with much less weight on his shoulders.  I have noted he hasn’t shown up for Monte Carlo, but I think he may take this series of Masters events more seriously than the last, as he will need the preparation for the French Open.  Given the consumate professional he is, I would dare say the one notch left on his belt that he wants is to beat Rafa in Roland Garros. 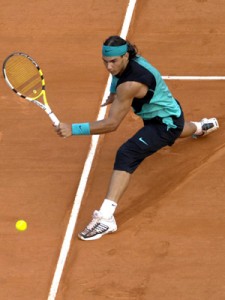 Speaking of Rafa, it will be intriguing to watch his progress over the coming months.  He missed a few opportunities to really give his season a boost in Indian Wells and Miami.  It’s still hard to bet against him on clay but I don’t think he’s ever really fully recovered from that Soderling loss last year.  He will be desperate to reestablish his dominance, but it will be more difficult as clay court tennis is all about muscle and stamina from the back, something he has lost a little of late.

What about the rest of the pretenders?  Novak Djokovic is an obvious choice for silverware this year, and will be looking to get Nadal’s number early on while he’s still vulnerable.  Andy Murray has never really looked comfortable on clay, and given his recent form I wouldn’t bet him doing well, but you never know.  There are outside shots to come from the likes of Nikolay Davydenko and Robin Soderling, but the man who I want to watch this year will be Juan Carlos Ferrero.

Every year there is always someone who has a special clay season.  In the past that has included Gaston Gaudio, Guillermo Coria, Nicolas Almagro, Albert Montanes, Nicolas almagro, Juan Monaco, Juan Carlos himself and of course the imperious Rafa Nadal. Can Juan Carlos recapture the magic of 2003? He has been on sparkling hard court form of late and that should hopefully transfer to even better form on clay.

So we hope this wets your appetite in anticipation of a great month to come of mud slinging, slip n sliding, muscle balling tennis!

1 thought on “Prelude to the clay court season”