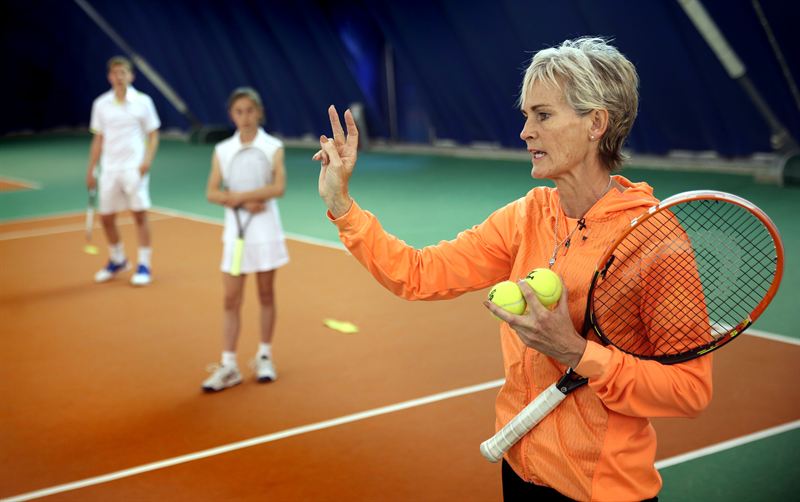 Judy, who is an ambassador of leading global tennis and sports apparel brand HEAD, was joined by a group of 12-15 year old boys and girls who are members of HEAD’s junior development programme, Team HEAD. The coaching masterclass also saw Judy host a Q&A with the Team HEAD players and their parents, providing them with tips and advice on how best to develop their game and cope with the demands of being seen as one of Britain’s biggest hopes for future Grand Slam success.

“Providing young players with good coaching and support is important to me, so it’s great to spend the day with some of Team HEAD’s leading junior players. I’ve been using HEAD racquets for about 15 years and remember when my son, Andy, was part of Team HEAD. I understand how important it is for young players to have the right support around them so that they can fulfil their potential and enjoy their tennis.”

Team HEAD is HEAD’s global player sponsorship programme aimed at supporting young, talented tennis players, aged 11-21 years, in more than 40 countries around the world. Team HEAD players benefit from partnerships with well-known coaches like Bob Brett and Emilio Sanchez. Unlike many other sponsored players in tennis, HEAD’s junior players not only receive the best equipment but they become part of Team HEAD, where they have on-going contact with HEAD and their coaches and are supported by local representatives.

Some of today’s leading tennis players such as Andy Murray, Novak Djokovic and Richard Gasquet have come through the Team HEAD programme and continue to use HEAD racquets. Team HEAD’s current crop of junior players have also shown promise for the future, with players winning the Wimbledon junior singles titles, the girls’ title at the US Open and making the French Open Junior Final in recent years.

Dave Shaw, HEAD UK General Manager, was delighted that HEAD’s young players had the opportunity to be coached and speak to one of the leading figures in British tennis.

“Both HEAD and Judy are passionate about offering the best coaching and support for promising young players and elite professionals. It is great that some of our juniors from Team HEAD and their parents have had the opportunity to learn from Judy, who has been involved in the journey from grassroots tennis through to becoming a Grand Slam champion. There isn’t anyone who has a better understanding of what is involved at every stage of a player’s development.”

Judy is well equipped to offer advice and support to young players. Her sons, Andy and Jamie, are the reigning Wimbledon Champion and a former Wimbledon Mixed Doubles Champion, respectively. Judy has also been Great Britain’s Fed Cup team captain since 2011, having previously been a Scottish national coach for nine years. In addition to mentoring Great Britain’s leading female tennis players, Judy is also passionate about improving tennis facilities throughout the country, attracting more girls to take up tennis at a grassroots level and increasing the number of female coaches.