Novak Djokovic might be the overwhelming world number one at the moment but the Serbian star has spent the majority of his career in the shadows of Rafael Nadal and Roger Federer. But with the 2015 season now well under way, it’s clear to most tennis fans that Djokovic is the current king of the men’s game and in no immediate danger of being replaced at the top of the world rankings.

The popular Serb, who gained even more fans than before by inviting a ball boy to join him in the shade during a break in play in last year’s French Open (see below), has been the dominant force in the men’s game for much of the past couple of years. He started 2015 by winning the Australian Open for the fifth time to cement his place at the top of the rankings.

With the French Open next on the grand slam menu, Djokovic is heading to Paris in the knowledge that victory at Roland Garros would complete a career slam of major titles if he wins the one grand slam title that has so far eluded him. On the two occasions Djokovic has reached the final of the French Open, it has been Rafael Nadal who has beaten the Serb on his way to the title in 2012 and 2014. During a period in time in which the Spaniard has racked up nine French Open titles, it has become almost expected that nobody but Nadal will win a grand slam on clay.

But with Nadal struggling with both form and fitness heading into the second major of the season, that could all change. And based on current form, it is hard to see beyond Djokovic (6/4 with betfair to win the tournament at the time of writing) as being the obvious choice as to who will win should the Nadal fail to show up in Paris in late May. Federer has started the season in disappointing fashion, as has Andy Murray, and it really looks to be a straight race between Djokovic and Nadal for the French Open title this year. 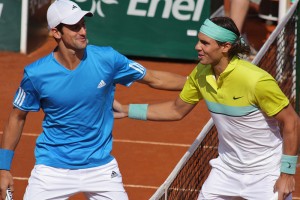 But a career slam might not be the only target for Djokovic in 2015, with some fans tipping the Serb to be in with a chance of becoming the first man since Rod Laver’s grand slam-winning 1969 season to win all four major tournaments in a year. Djokovic came close in 2011 to matching the Australian legend when he became the sixth player to win three grand slams in a season, and there is little denying that the 27-year-old is a better player than he was four years ago. With the Australian Open title already in his bag, Djokovic’s confidence in achieving that rare feat would significantly increase should he add that first French Open crown to his collection. After seeing off 2014 champion Stan Wawrinka in the semi-finals, Djokovic beat Andy Murray for a third time in the final in Melbourne to claim his fifth Australian Open title.

So, how is Djokovic looking when heading into the rest of the grand slam tournaments in 2015?

On paper, there is only one winner of the French Open in a season in which Djokovic has dominated and Nadal has struggled. But Djokovic will be well aware the game isn’t played on paper – in this case, unfortunately for the Serb, it’s played on clay, a surface on which Nadal is the undoubted king. But despite the fact Nadal has won nine of the last 10 French Opens, Djokovic will never have a better chance of winning the one title that has so far eluded him. The Spaniard has been struggling with injuries in recent weeks and his withdrawal from the tournament would be a huge boost to Djokovic’s chances. But the 27-year-old will no doubt want to beat Nadal in the final to really prove he deserves the title.

Djokovic will no doubt head into Wimbledon full of confidence after such an excellent recent run at the All England Club. The Serbian has reached the final in three of the last four tournaments, lifting the famous trophy in 2011 and again in 2014. A heart-breaking defeat in the final in 2013 was clearly a motivation behind Djokovic’s incredible performances last summer on the way to a thrilling five-set victory over seven-time Wimbledon champion Roger Federer in the final. The chance of winning four grand slam titles in a year could be all the motivation he needs this year.

The French Open might be the only major title Djokovic has not won but there is an argument to claim the US Open has been the Serb’s most unlucky grand slam event. While he won the tournament in 2011, Djokovic has been a beaten finalist on four other occasions and he’ll be determined to make sure he ends his four-year wait for a second title at Flushing Meadows, especially as there is a season grand slam on the line.